In 2014 BELL was hired by an architectural firm to 3D laser scan the interior of the newly constructed Exhibit Hall at the Kenai National Wildlife Refuge Visitor Center located in Soldotna, Alaska. There had been some changes in the design during construction so the client requested BELL to scan the interior of the newly constructed space in order to capture the changes and including the HVAC routing so that they could make sure the proposed exhibit would still fit in the space. Bell provided the client with laser scan data and dimensioning of some critical areas. 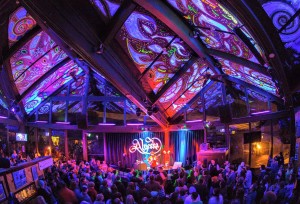 In 2012 BELL provided laser scanning services to Z-Architects to scan the inside of the Sitzmark Bar Grill located in Girdwood, Alaska. This purpose of this project was accurately dimension the ceiling area for placement of sound panels. The main issues were that the ceiling was high (accessible by scaffolding only), irregularly shaped, and had various lighting and piping hanging from it. The dimensions and conflicts of the various sections were identified using the laser scan data allowing the panels to be pre-fabricated so that the scaffolding only had to be erected for installation, thereby minimizing the disturbance to the restaurant.

In 2015 BELL provided 3D scanning services for 19 complete modules and the associated exterior interconnected piping located at the GC1 facility. This effort was completed to help BP engineers in the projects initial planning phase as well as their sub-contractors in the final design phase. The goal of this project was to have a completed design in place before the next facility turnaround (TAR) to remove and replace the wet-gas piping throughout the facility. BELL laser scanned all the modules associated with project, tied all of the gathered laser scan data to the local plant control network and provided a complete ACAD model of all of the elements within each module including, but not limited to; structural steel, piping down to ½” diameter, electrical boxes and conduit runs, HVAC, instrumentation, and architectural features sertraline anxiety.